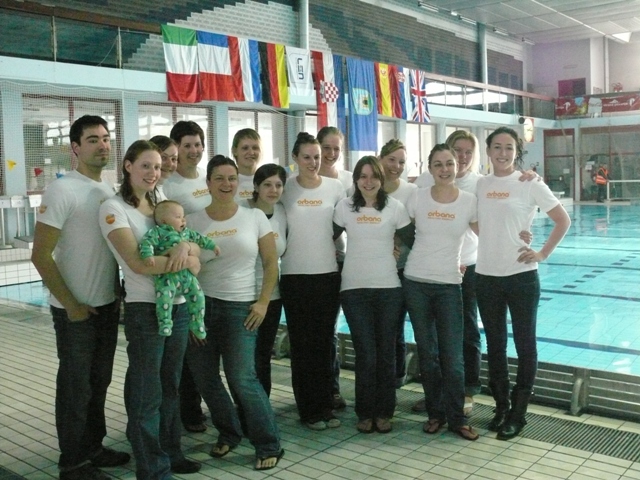 On 4th December the Penguin Ladies 1st team jetted off to the capital of Croatia, Zagreb, for the European Club championships aka LEN Trophy. As the only non-professional team in the tournament it promised to be a challenging weekend.

We were met at the airport by the hosting club, HAVK Mladost ZAGREB, and travelled to our hotel with the Budva men’s team, who are one of the Europe’s top men’s sides. They had arrived from Montenegro to play our host’s men’s team on the Saturday evening, as part of the Adriatic League.

Our opening game later that evening against the hosts was an entertaining match for the home crowd. They established a 3-0 lead after the 1st quarter, and although we fought back strongly we couldn’t quite close the gap, losing 6-5 (3-0, 1-1, 1-1, 1-3).

Our second game was against one of the best clubs in Spain, CN Mediterrani BARCELONA. Their coaching panel said it all – head coach, assistant coach, team doctor and team physio! We lost 19-4 to a very well oiled and polished professional team.

The Saturday evening we were fortunate enough to watch the game between Mladost and Budva,. We knew it was going to be a good game and it lived up to its promise. What a display of skill, strength and speed!

Our third and final team of the weekend was Tas 2000, a Belgrade-based team. we fought until the final whistle and held the match to a draw at 4-4.

A good weekend of water polo was played and watched by all. I would like to take this opportunity to thank Orbana for supporting us with their healthy energy drink which helped us to sustain the energy we needed to successfully compete against these professional teams.