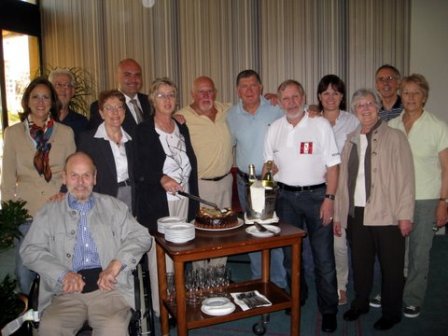 Eleven ‘senior’ Penguins with partners visited Malta at the end of May, for the fifth consecutive year.  They were greeted at the Marina Hotel by Charlie Mock, honorary member of Penguin who lives in Malta, the hotel’s general manager, Reuben Mifsuds, and duty manager, Steven Mock.  Reuben Misfuds said a few words welcoming us back and then produced a chocolate gateau decorated with a penguin and accompanied by champagne for all.

Later in the trip Charlie Mock was delighted to receive a Penguin 90th anniversary lapel badge presented by Lew Bloomfield.