And I can prove it.

Partly because I enjoyed so much my last water polo cheer-leading weekend and partly because I promised to follow the team as often as possible, last weekend I travelled to the Black Country for the second time in two months to watch our Penguin Emperors play two games in the British-Water Polo League’s Women’s Championship 2.

And it was a lot of fun, although we lost the first game, and tied the other, in a dramatic way. More on that later.

It was an exquisite, Canadian-style bright and cold Saturday morning when I set off from London, and all the way to Walsall via Birmingham. After an uneventful train journey I had  lunch at the monumentally-fronted and packed Wetherspoon pub close to the pool.

I raced to the team hotel – modest, cheap, and a bit away from the action – to drop my bag and get back in time for our first game, at the Walsall Gala Baths. (I have been living in Britain long enough to know that ‘gala’ can be in the name of the public swimming pool and I had made a mental note to include the word in my Google Maps search! I will keep some historical notes on the said baths for a future blog… if you can wait!) 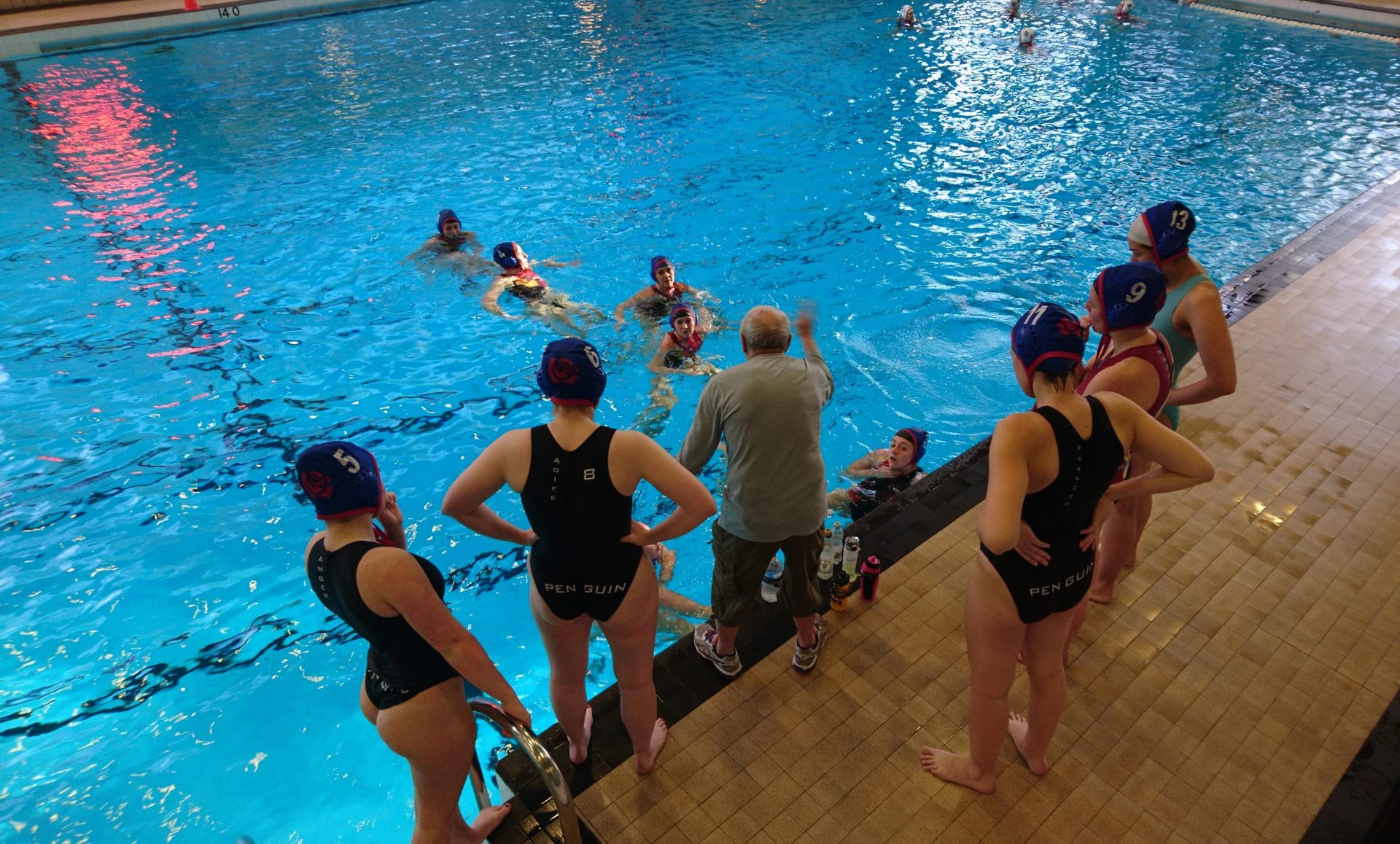 Game 1: Penguin Emperors vs the English Roses, a very experienced team. It started quite well for us, but the second half didn’t go our way at all. Although a couple of late goals gave me reason to cheer and send WhatsApp updates to the Penguin masters swimmers to were supporting from afar.

I sat in as Coach Shakey led the post-match debrief with Fiona (Greer) – team captain and our most experienced player. Everyone was given the opportunity to speak. I made notes to help me improve my next-to-nothing knowledge of the sport.

Between matches I had planned to head to a local pub to watch England play Ireland in Dublin in the Six Nations Rugby. As it turned out, I didn’t go alone because, apparently, 100% of the team like beer. And rugby!

Except for the couple of us who cheered for Ireland, we emerged in a jolly mood and headed out for dinner. The meal was another jolly affair (and cheap!), and sitting mid-table, I was asked to, or decided that it would best if I plugged my ears on a few occasions! Pat relayed to me some of the key ‘points’ being discussed on my right. On my left, I caught Katie doing a bit of coaching for Naomi and Ella using a beer bottle and a few glasses. 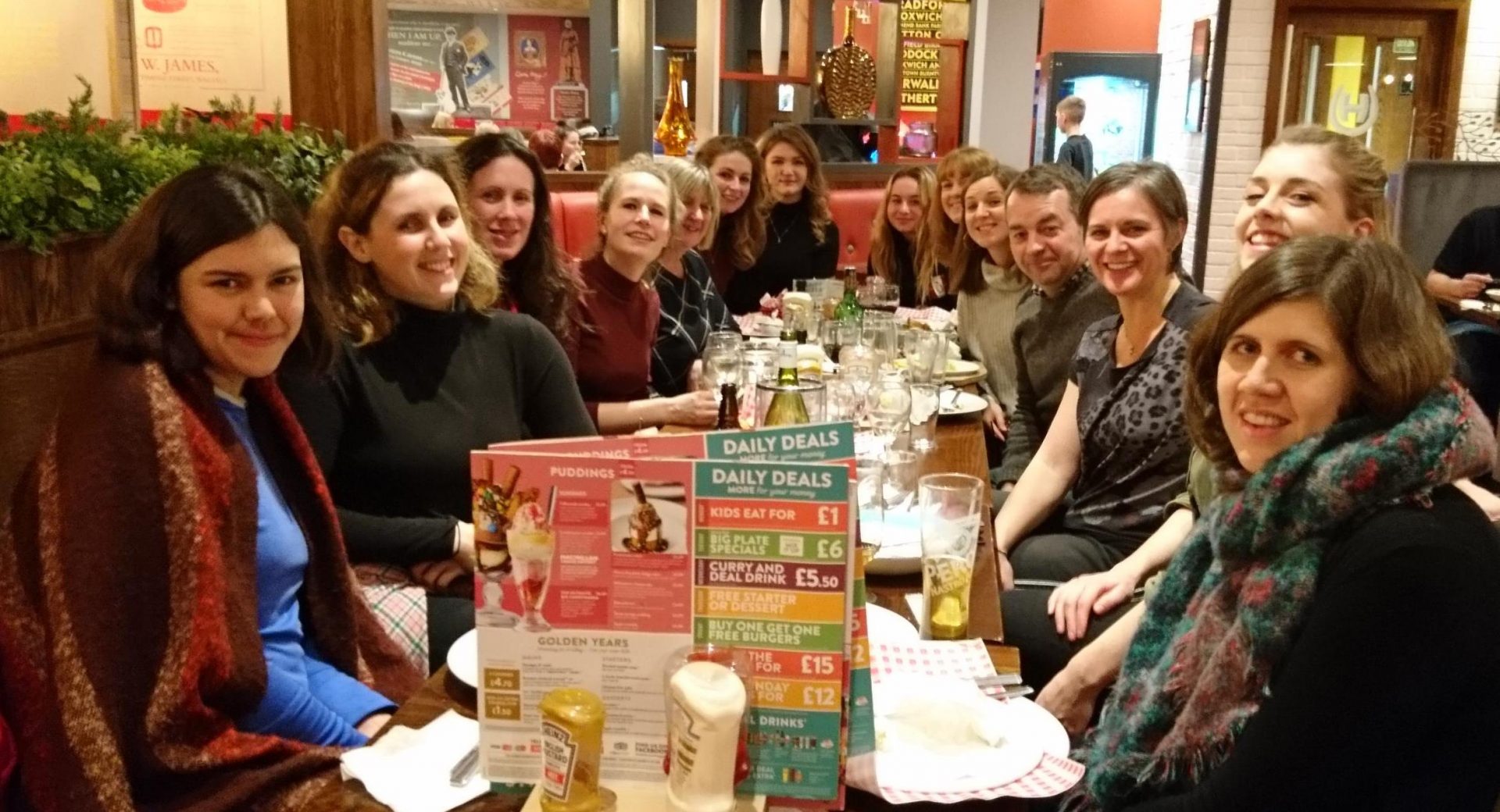 In the end, everyone on my right went out for a boogie while the rest of us headed back to the hotel.

By 11:00 on Sunday we were all on our way for breakfast at the same Weatherspoons where I’d had lunch yesterday. From ‘large vegan’ to ‘All-American’, and just a cup of tea for me (Fiona, Shakey and I had eaten a ‘working breakfast’ at the hotel since were up before the late-night dancers).

The atmosphere over breakfast was subdued but by the end of the pre-game team talk back at the Baths, everyone seemed focused and raring to go.

Game 2: This time we were playing against Otter Lutra. Emma: “We really don’t enjoy losing to them.”  A hazardous admission? Whatever: We didn’t.

We were 4-3 ahead in the 4th quarter, from a series of notable long distance goals from Alice (Woods). Then Otter managed to strike back with an equalising goal in the very – literally very – last second, and despite an appeal at the referees’ table about the timing, the result stood.

My main impression of the way we played: ‘Focused and sustained execution of the main points raised in the pre-game team talk.’ Cool.

The speed at which the girls got out of the pool, got dressed and ran to the train station made my head spin a bit. I wouldn’t be surprised to learn that some got home in their swimkit!

In summary, I highly recommend joining our posse of travelling supporters ‘Forza Penguini’ (name under development – alternatives under consideration include Penguin Wings/Flippers/Feathers!).

Next trip: Gloucester on 16 and 17 February to watch the Penguin men in BWPL action.

Next next trip: Northampton on 2 and 3 March for the final women’s games.