The Hillingdon Penguin Fun Tournament and Christmas Party in Uxbridge on Saturday 11 December 2021 was very special. Due to Covid we hadn’t had a party for two years and this meant we’d also missed the opportunity to celebrate the achievements of our players. It also wound up a successful year and a particularly busy term in which we’d gone from no tournaments to full on competing again.

A big thank you to the coaches

This branch of the Club continues to flourish, many thanks to the dynamic coaching team of Shaun, Adam, Mickey and Will, with occasional refereeing guest appearances from Michael. Each coach has a particular group of players and area of pool space, but they also collaborate to ensure the development of every child.

We were delighted to have the irrepressible Anton Restall come and help score, especially as Adam had worked out a complex system of bonus points, to encourage fair play and inclusion of the younger players. Congratulations to the winners, Purple Team, comprising Will M (captain), Bailey, Elena, Zayd, Ibrahim, Aronas, Oliver D and Aaryan. Here they are, proudly holding the Penguin Development Trophy. 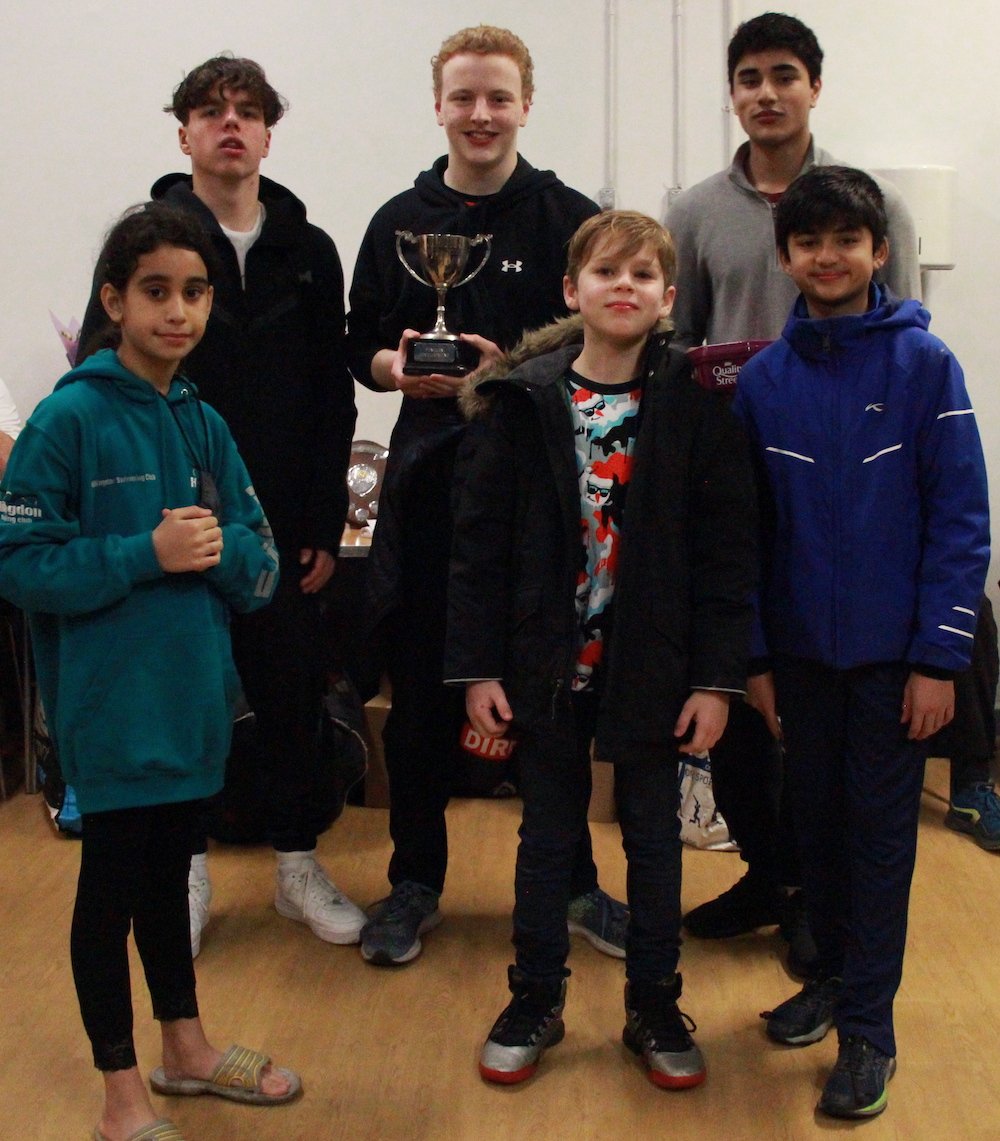 Team Baldwin saved the day by organising the party in a room beside the athletics track, chosen for its extra size and ventilation, but also more challenging to find. We are truly grateful to Ruth, Chris, Zoe and Thomas for all their hard work and to all our parents who brought an amazing spread ranging from noodles and pastries, to cakes and fruit. Sophie made an enormous and very tasty carrot cake which she somehow managed to bring on the bus.

We then went on to present awards which spanned the last two years. As always, it had been difficult to pick individual winners as the teams have performed so well and we’ve seen many players improve and exceed expectations.

These recipients were chosen and presented by Adam Maidment who coaches them:

Winners nominated and presented by their coach Mickey Tritto:

Winners chosen and presented by Shaun Hill who coaches the Advanced Group including the under 16 mixed team, under 16 girls team and under 18 boys team:

Thank you to all parents for your support.

Mickey made a powerful impromptu speech about how hard Shaun has worked coaching this term and also thanked him for seeing and encouraging his own potential when he was sixteen. We are also hugely indebted to Adrian for all his poolside support, Anton for scoring, Youguang for the photographs and last but not least Kerry should be recognised for all the support she gives in the background.

It’s great to be able to celebrate all the achievements of the Hillingdon Penguin family.

Hillingdon Penguin runs alongside our Latymer water polo section for juniors. Find out more about playing junior water polo with us.