I remember swimming twice a week at first. I had been to the pool with my school and heard about the club. It was the late 1970s and had not long become the Penguins (formerly the Hammersmith Ladies SC) and I recall that it grew very quickly.

The annual club championships were hotly contested at several age groups. With my parents helping to run things, I can remember our house being full of the various trophies and medals before the event.

The first coaches I can remember were Mr Graham and his daughter Karen and Mr Street. Some time after Jim Marjoram started and my dad started helping out poolside too.

Gala time was great fun; imagine now, a  minivan full of children zipping around London to various events with not a seat belt in sight. We were a noisy team and loved supporting each other from the poolside. At this point we had club costumes and, I think,  club bags.

We also got very excited for the end of year disco held in a local school hall.

The Club developed further as we got older. Jim introduced land conditioning sessions and a few of us went to the Queen Mother pool in Victoria to train with Otter SC.

As time passed many of the juniors left, either giving up swimming as a sport or, like myself, to go on to further education. For me it was the end of that chapter with Penguins, but not the end of my story as I later returned as a masters swimmer for many years.

During the first week of October I completed the annual SwimTheIsland event in Liguria, Italy.

The location of the swim was absolutely beautiful, and one of the best places to do an open water swim.

The 3.5k route started at the beach in Spotorno, carried on along the beach back to Bergeggi and then around the marine protected island of Berggegi, which is known for its underground caves and dive sites.

There was a good atmosphere before the race started, everyone was enjoying themselves and making the most of the good weather before we got into the water. After a very concise 20 minute safety briefing it was time to go!

We were let off in waves of 100 people, 5 minutes apart. Once I had managed to get out of the crowd as we entered the water, the swim out to the beach in Bergeggi was very enjoyable. The water was clear and warm, and in my opinion, a lot more inviting than lake swimming in the UK! There were lots of fish and coral, taking my mind off the fact that I had a long swim ahead.

The going got quite tough round the back of the island with currents and waves kicking in. At one point it felt as if I wasn’t moving at all. Luckily, my training with the Penguins stood me in good stead, and I was able to make it around the island. From there it was a nice gentle swim back into the beach and the cheering crowds that were waiting at the finish line.

I completed the swim in 1 hour and 13 minutes which was better than I was expecting.

After the swim I was able to soak up the atmosphere on the beach. The organisers put on a pasta party which was much needed to replace the energy used battling off the waves!

The event itself was extremely well organised, a safety boat was never more than five metres away, and there were people on hand to guide if you went off course. Apart from the excuse to catch the last sun of the summer, I would thoroughly recommend this race for anyone who is into open water swimming. It was definitely the most fun swim that I have completed, and the location was second to none.

Saturday 29th June started with a bright clear and sunny morning. A heat wave was forecast and by the briefing it was already 30 degrees in the bowl created by the buildings. Surrey Quays, the venue, is a large dock surrounded by residential buildings and the air is very still. 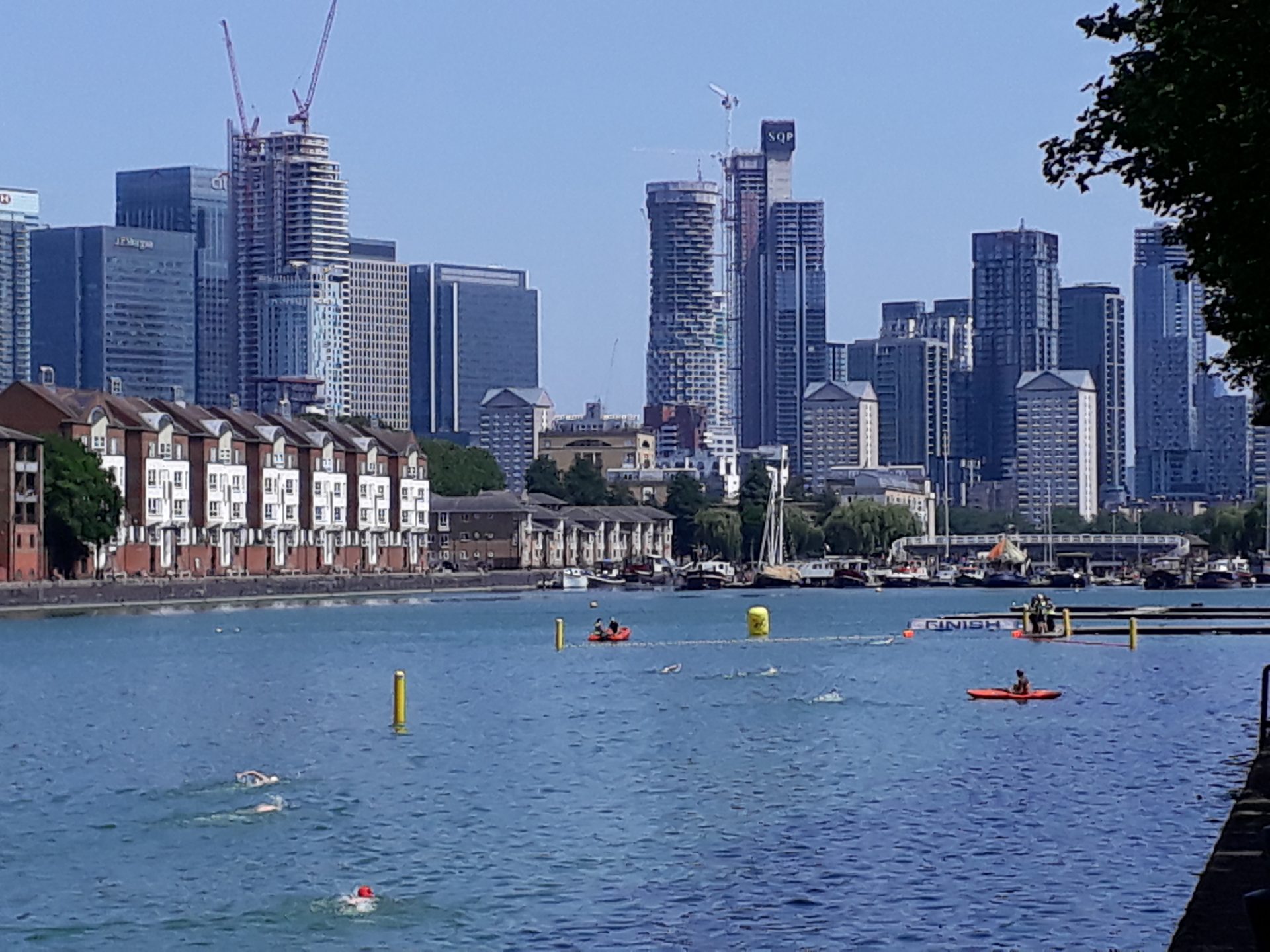 The water is deceptive, looks a little grey but is actually fresh and clean (ish).

The briefing talked about the cold shock of a 21-degree water… really?

There were 2k, 3k and 5k races and I was representing Penguin in the latter. There were lots of young swimmers in all the events which is really nice to see given the predominance of pool swimming for age group swimmers.

The biggest risk was vertigo from going around a 500m loop 10 times. That is, of course, if you don’t include failing to count properly. 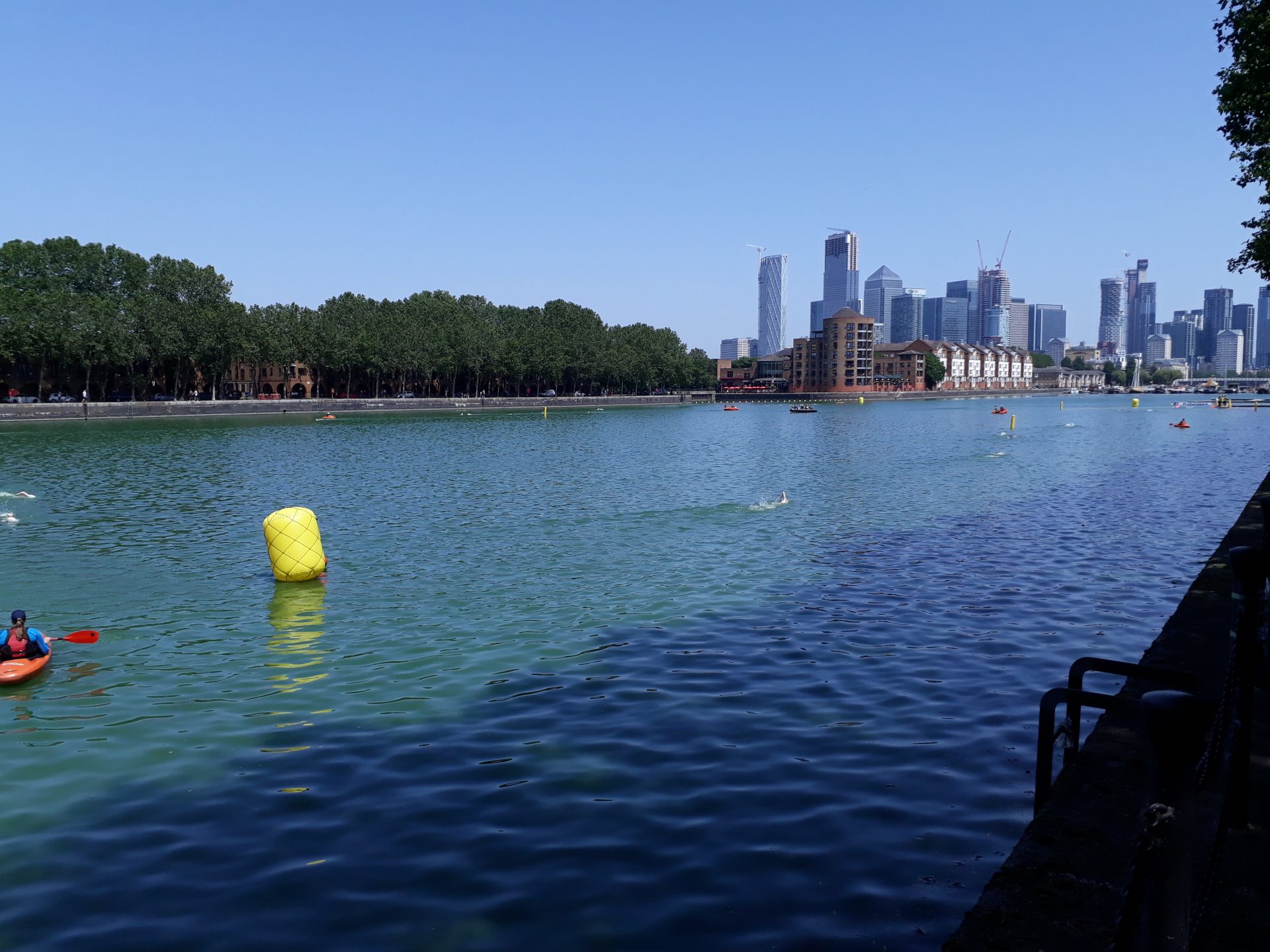 5k is a long way – 3 and a bit miles – made worse by 10 laps of a square course with 39 turns, swum anti-clockwise which is not the best for right-sided breathers. For those unused to distance swimming, the turns do change your swimming immensely. It is tough swimming strongly for an  hour and a half with no lines to guide.

For me, this was the first time in the London Region Open Water Championships since significant shoulder surgery and it made winning the over-60s category especially sweet. Nice to bring home a Regional and County medal for West London Penguin. 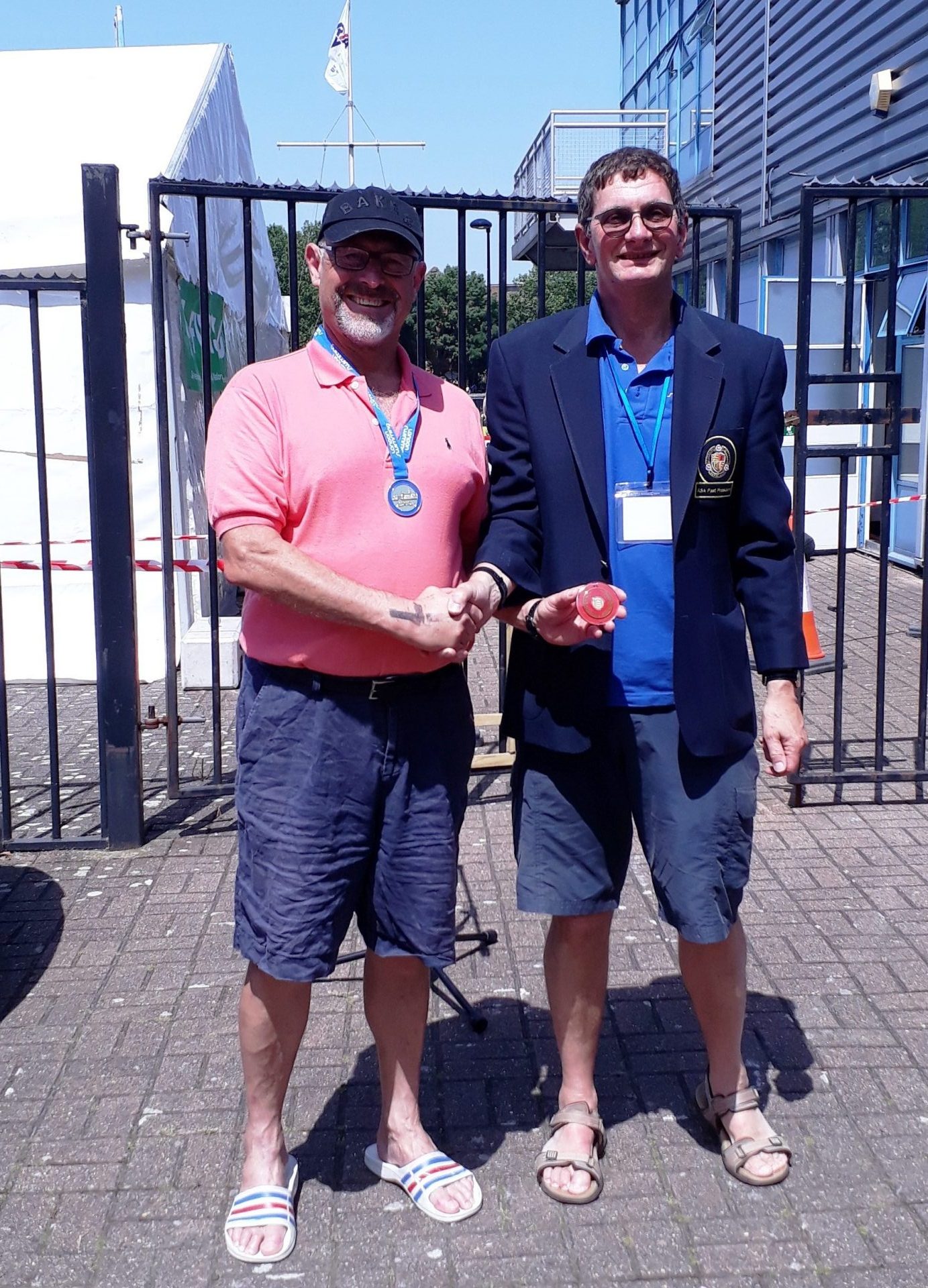 Jesse Kelly and Vito Palladino took on the 5k race – 10 laps of the course.  Ambra Finotello, Jess Needham and Claire Berry raced in the 2k distance.

Claire’s daughter and a posse of Penguins were there to cheer them on.

The high water temperature dictated that it was a non-wetsuit swim and our swimmers were in heats with age-groupers aged 12 upwards, as well as other masters swimmers. In their own words…

I had a wonderful time swimming Surrey Docks in the summer sun.  It’s not every day you can swim against the backdrop of the Canary Wharf towers on a hot day.

The event was competitive for some – the dive start off the dock was new for me – but also just a bit of fun for some of us Penguins.  I enjoyed the opportunity to swim somewhere new in London.

Thanks to Vito for organising as the team manager, and all of the supporters who came to cheer us on.  It was a fun day! 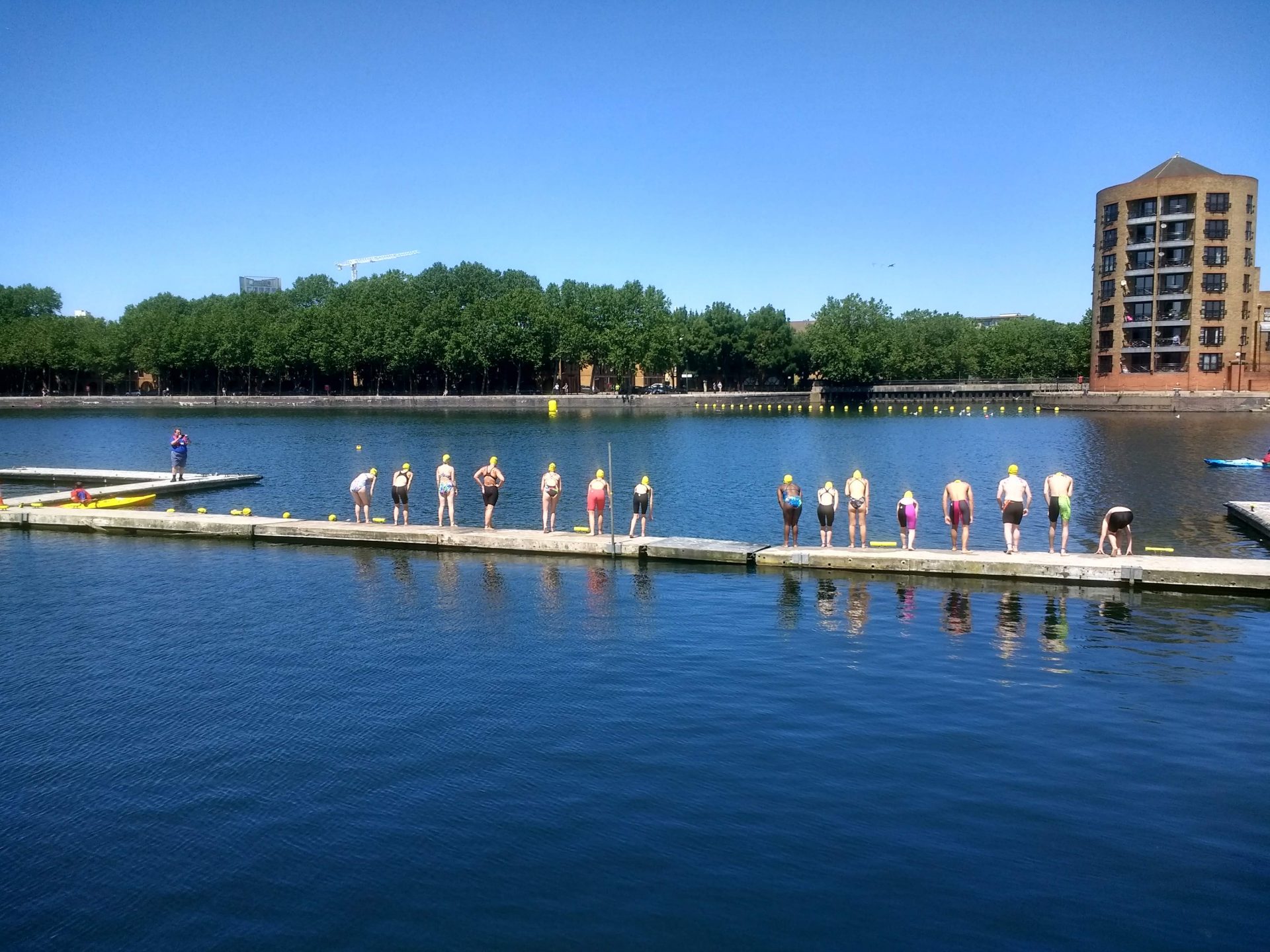 A great day for a swim; hard work but worth it. I actually thought I was last as we were so spread out but happy and surprised to be told I wasn’t! 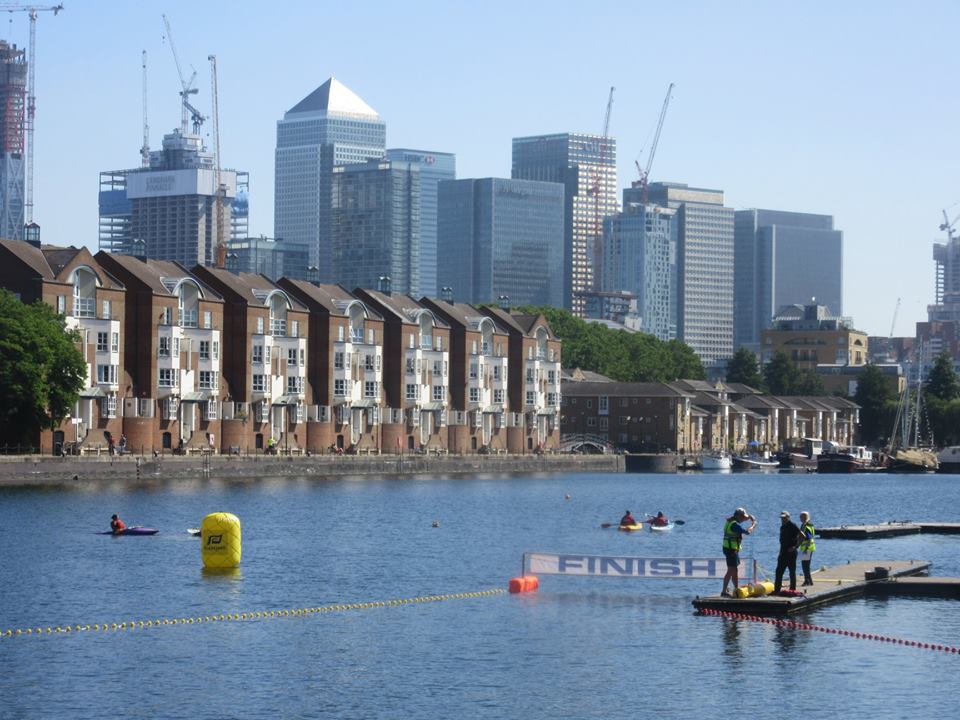 We had a really great time. It was a beautiful day and a lot of people showed up to cheer us all on.

I was pretty blown away with the speed at the start as a group of youngsters quickly distanced themselves. I ended up on my own for much of the swim but I was even more shocked when the speedy group of both boys and girls lapped me on my 7th lap! There are some really fast swimmers out there!

It was really great to see so many of all ages at the event, and to have a great turnout from the Penguins.

Our small team did brilliantly.

In the London Region results, Jesse won the 40+ men’s category, qualifying for the Nationals in July. Vito finished 2nd in the 30-39 men’s race.

Split out into the Middlesex results, Jesse and Vito both took gold.

In the London Region results, Jess took second place in the 25+ women’s race with Ambra finishing third, and Claire 4th.

Separated out into the Middlesex results it was gold, silver and bronze respectively.

For the Penguin masters swimmers, tonight is the last Wednesday session at St Pauls School until September. Then we have two Wednesdays without training (4 and 11 July).

After that, our Wednesday swim session will move to Latymer Sports Centre from 18 July. It will be at the slightly later time of 8-9pm and we be must be out of the building by 9.15pm.

These Wednesday sessions at Latymer are contingent on Sarah, Vito, Jess, Kat, Jesse and Johnny being available to provide lifeguarding; if you see them on the poolside, please show your appreciation that they have been willing to give up their swim to allow the session to go ahead.

From the date we start Wednesdays at Latymer, we will lose our Friday sessions because the centre will close early for the weekends.

If you are thinking this is all a bit complicated, the table below lists where we are swimming and when: