The clubs co-existed for many years, using local pools including the Hammersmith Public Baths in Lime Grove where there were two baths – the first class pool and the second class pool (pictured below). See the baths price list leaflet from 1925 (front) (reverse). 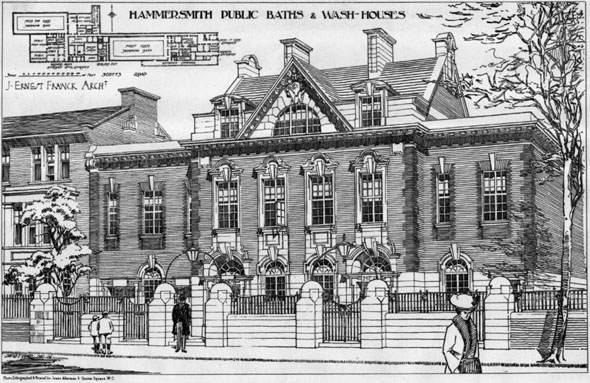 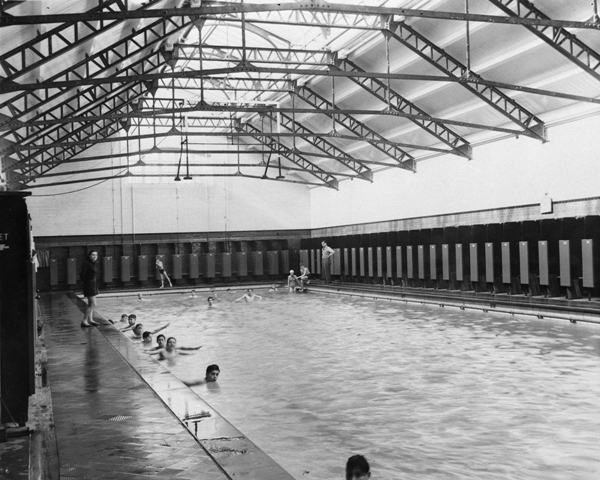 We don’t know very much about Hammersmith Ladies Swimming Club, however we have a richer archive of Penguin SC through to the present day.

Penguin’s sporting excellence was recognised by their involvement in the official opening ceremony of the new Uxbridge Open Air Swimming Pool. The programme below shows several Penguin swimmers in Event 1 – the Exhibition of Modern Speed Swimming. Penguin also featured in Events 5 and 6 – the Relay Race and the Grand Water Polo Match. Click on the image to enlarge it. 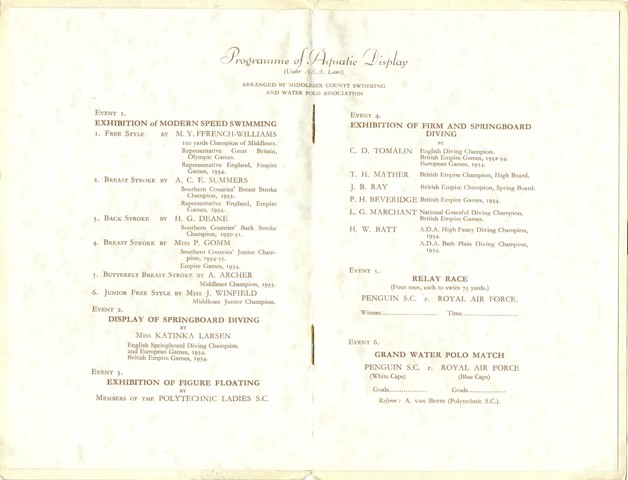 This press cutting from 1938 talks about the ‘Famous Penguin Club’.

In 1948 Penguin played against the USA water polo team who were in the UK for the Olympic games, at the open air pool in Bloemfontein Road. See the match programme (cover) (inside).

In the 1940s, 50s and 60s water polo was a hugely popular sport and spectators would queue around the block to watch matches. Penguin was clearly a source of local pride with frequent mentions in the press. For example, in 1951 Penguin’s military-style training was in the spotlight; in 1953 a dramatic sea rescue by members of the Club made the headlines; and the end of yet another successful season made the news in 1959.

In 1952 Penguin’s success was celebrated on the cover of the June issue of The Swimming Times: 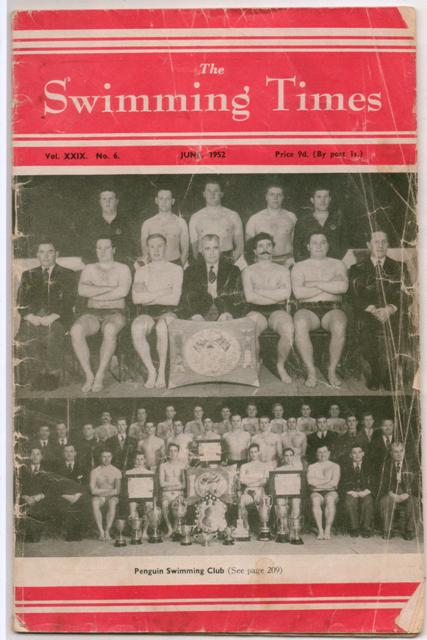 Out of the water, the Penguin dinner dance has been a regular social event throughout the Club’s history, as illustrated by this menu from 1959 (cover) (inside).

For many years members received a Club Card when they joined Penguin. This listed the Club Rules, past presidents, and international honours as well as being proof of membership. the image to see the Club Card from 1975. 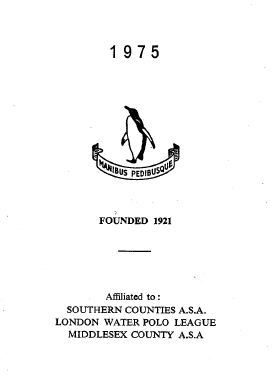 With a growing membership in more recent years and increasing use of electronic media, details from the Club Card are now mostly on this website.

In 1976 Penguin SC and Hammersmith Ladies merged and we became Hammersmith Penguin Swimming Club. See the minutes from the Special General Meeting at which this merger was agreed.

In 1986 Hammersmith and Fulham Council recognised the Club’s achievements in becoming Men’s British Water Polo Champions that year, and it’s work across the previous 70 years in inspiring participation in sport throughout the borough. This agenda item from a Council meeting on 15 October 1986 contains a citation that was later presented to the Club as a framed illuminated scroll at a ceremony hosted at Hammersmith Town Hall by the Mayor.

We assumed our current name – West London Penguin Swimming and Water Polo Club – in 2006. This was to reflect our broader representation in London. 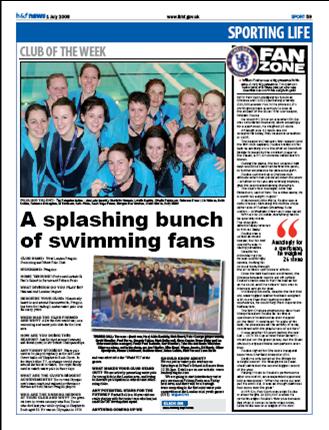 We’re a bit behind in bringing this page up-to-date with our newer history – please bear with us!

As well as the pages in this History section of our website take a look at the history photos in the Photos area.

If you can add to our archive of the Club’s history and achievements we’d love to hear from you. Please e-mail information and/or images to Sarah Wren, webmaster, via the contact form.

We’d like to thank Hammersmith and Fulham Local History Archive for allowing us to reproduce images and materials from their collection.