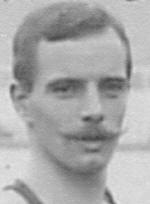 Rob Derbyshire and his wife Alice were the founders of our Club. Rob was an outstanding athlete in both water polo and swimming.

John Henry Derbyshire (1878-1938), known affectionately as “Rob”, was born in Manchester, the son of a baths superintendent. He had a long competitive career from winning his first prize at the age of six through four Olympic Games until 1912. He coached the Hammersmith Swimming Club and the 1928 British Olympic Team. On the administrative side, he was British Team Manager at the 1936 Olympic Games.

His father, John Derbyshire, was the superintendent of the Osborne Street Baths in Manchester and the inspiration behind its water polo team which won the 1900 Olympic Gold medal and dominated in the UK winning the National title from 1894 – 1900.

Rob’s father used him at the age of three as a periscope during a demonstration of a submarine in the water. He became known as “The little Robin” – later abbreviated to “Rob”. The name stuck with him for the rest of his life.

At the age of fourteen Rob competed in the Yorkshire Ornamental Swimming Championship (men only), and won the title in 1893 and 1894. He is reported to have performed front and back somersaults, torpedo and other manoeuvres akin to what synchronized swimmers do today. One of his most spectacular stunts was to perform a somersault while sitting on a chair. Historians feel this was the first recognized synchro competition, albeit won by a man!

Rob was capped as an England International at water polo nine times during 1896, 1898, 1899 (captain) and in 1900. He was in the Manchester team which won the national team polo competition on seven occasions.

This fast water polo player was also recognized as the fleetest of British sprinters from 1898 until 1907 when he became the first Englishman to break one minute for 100 yards freestyle.

At the 1900 Olympics in Paris, Rob was Britain’s leading medal hope in the 200m freestyle, the shortest swimming event at the Games, However he was unable to compete in the event due to a stomach virus. He was due to swim in the strong British team for the 200m freestyle relay, but the team arrived late for the start and weren’t allowed to compete.

The 100y race of 1902 was a classic between Freddie Lane and Dick Cavill, both of Australia, and Rob almost finishing together. The race went to Lane who equalled the “magic minute” time for the first time. The contestants had to come out from the changing rooms three times to acknowledge the applause.

British representatives were not sent to the 1904 Olympics in St. Louis but at the Interim Games in Athens in 1906 he was member of the bronze medal winning 4x250m freestyle relay team and also placed a creditable 5th in the 100m freestyle. He also competed in the 400m event.

In 1904 Rob left Manchester Osborne Club and co-founded Old Trafford Swim Club. He later founded the Lime Grove Baths in Hammersmith, London and the Penguin Swimming Club, one of the outstanding water polo teams of the 1920s. Rob coached several Penguin members to success at the 1920, 1924, 1928, 1932 and 1936 Olympics and has probably placed more swimmers on GB Olympic teams than any other coach.

In 1907 at the Victoria Baths Manchester, the 100y finalists alongside Rob were Tartakover (Australia), Radmilovic (Wales), de Halmay (Hungary), Dockerill (Ireland) and Daniels (USA). Daniels won with a new World Record of 55.4 sec and in third place Rob became the first British swimmer to beat the minute for 100yds. Such was the excitement that the spectators clamoured for speeches from the medallists before the competition could be resumed!

At the London Olympiad of 1908, Rob had his greatest Olympic triumph as a member of the winning British 4x200m freestyle relay, along with Willy Foster, Henry Taylor and Paul Radmilovic.

At the 1912 Games in Stockholm he again competed in the 100m freestyle but was unplaced.

In the A.S.A. swimming championships Rob won a total of ten individual titles including six wins in the 100y freestyle – a record. Like most individuals of his day he swam over a wide range of distances and as championships weren’t centralized it required travelling all over the country.

Rob’s wife Alice shared his enthusiasm for the sport and on their move to London was co-founder of Hammersmith Ladies Swimming Club in 1916 which had several Olympians. She also was chaperone to the 1920 Olympic team in Antwerp.

After Rob’s death at the age of 59 his wife Alice remained very active in the swimming world where she was known affectionately as “Auntie Alice.” She lived to the ripe age of 94 years having been President of the Southern Counties A.S.A in 1946.

In March, 1948 a memorial tablet was unveiled at Lime Grove Baths, London in appreciation of the work Rob did among the school children in Hammersmith.

Around 1949 or 1950 Alice presented the Rob Derbyshire Memorial Shield to Penguin Swimming Club to perpetuate the memory of Rob Derbyshire and to honour those members who gave their lives during the Second World War. This trophy is now awarded annually to the Club member who in the opinion of the Committee, has brought the most credit to the Club across the year. See the winners here.

A portrait of Rob hangs in the entrance hall of the A.S.A., a lasting tribute to an outstanding swimmer and personality in the sport.

Edited from the writings of Dr. Ian Gordon (GBR) and reproduced with the kind permission of the International Swimming Hall of Fame.